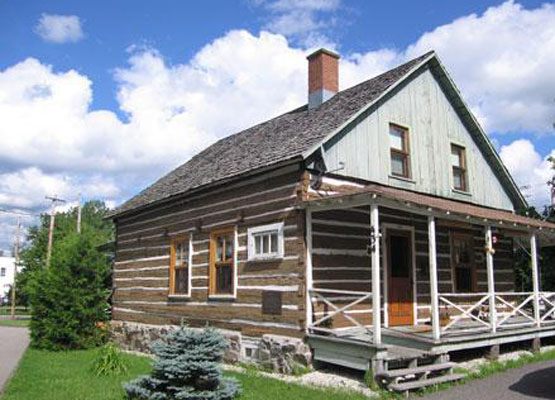 On the other side of the bridge are the remains of the Laurentian Water and Power Company. Even though this is an English name, its shareholders are residents of Mont-Laurier, as are their families and friends. They formed this company at the invitation of Jean-Baptiste Reid who wanted to produce electricity. The power station came online in 1912. The bridge dam was added in 1925, and the Laurentian Water and Power Company obtained the rights to supply electricity to the town for a period of 10 years.

Unused for many years, the station was renovated and put back into operation at the end of the 1980s by a private producer. The electricity produced is sold to the public Québec corporation, Hydro-Québec.

Just behind the dam and power station can be seen the house of Solime Alix. This post and beam construction with dovetail assembly is typical of the first buildings put up in the early days of settlement. They were of course built entirely of wood, a material that was readily available and cost very little. There are no visits to the interior of the installations.