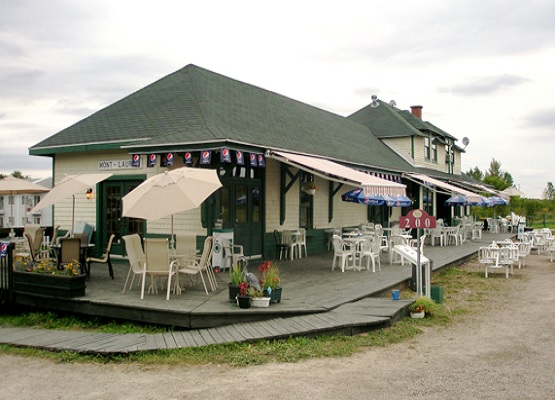 The Mont-Laurier station was inaugurated in 1908 and the first train arrived in Mont-Laurier in 1909. The station was the last in a series built by the Canadian Pacific in response to an initiative of the Québec government, which wanted to encourage settlement in the region north of the Saint Lawrence River. The last time a train made a stop here was on November 13th, 1981.

Among the characteristics of the Canadian Pacific station in Mont-Laurier, one remarks the rectangular plan and well-balanced mass, made up of a central section of one and half floors roofed in hipped style, with crowned dormers and prominent chimneys. The building is flanked by two wings of one level only under a gable roof. The original structure remains in the interior. Note the floors, walls, windows, doors and counter. Given its greater heritage value, the train station stands out from the other heritage buildings of Mont-Laurier.

Nowadays, visitors to the train station will find the Café de la gare, operated by Maison Lyse-Beauchamps, open for business during lunchtime. The station marks the end of the 200-kilometer historical trail "Le P’tit Train du Nord", once a Canadian Pacific railway track and now a bicycle path.This 200-kilometer linear park, from Saint-Jérôme to Mont-Laurier, tells the story of the Antoine-Labelle RMC with its 46 interpretation panels placed along the side of the bicycle path to satisfy visitors’ curiosity.

The town of Mont-Laurier is part of the Route du Lièvre Rouge, a tourist circuit developed by the Société d'Histoire et de Généalogie des Hautes-Laurentides.