No matter what the season, festivals and other exciting events are always taking place somewhere in the Laurentians. Lovers of music, dance and theatre can vibrate to the rhythm of numerous different festivals and discover the creative universe of artists from here and abroad. On the sporting side, a number of major events take place each year against the beautiful background of the Laurentians, and feature an impressive variety of sporting disciplines. Lovers of fine food are also well provided for, there being many an invitation to come and participate in the pleasures of the table. Families can have fun together all year round at one of the many events designed for the amusement of young and old. Up North, fun times are always on the menu! 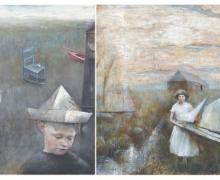 Come and discover the works of painter Maxime Lacourse, a Fellow of the Elizabeth Greenshiels Foundation of Canada, at the Maison de la Culture in Saint-Placide.  Maxime opens the door of his works Take part in the exhibition Poétique du débris by Danielle Benoit in Sainte-Adèle! Violaine Lafortune’s works will be on display at the Centre d'exposition Mont-Laurier from January 19 to March 21, 2023. Attend the opening on January 19 at 5 p.m. spring break at the centre d'exposition: at child height
Blainville

As part of the school break, the exhibition Hommage à Riopelle : une ode en couleur presented by Blainville-Art will be arranged so that small visitors can discover the works at their heig Come and see the exhibition Bienvenue chez eux by Alexandre Lauzier at Place des citoyens de Sainte-Adèle.  This series of photographs, mostly captured in Sainte-Adèle nature, aims at the awareness The City of Mont-Tremblant is proud to present the exhibition Les veines de la Terre, by Laurentian sculptor Mireille Dubreuil, from February 10 to April 24, 2023, in the Alphonse-Desjardi